Buy a copy via Amazon.
Goodreads.

Andrew Gross is the author of the New York Times and international bestsellers Eyes Wide Open, The Blue Zone, The Dark Tide, Don’t Look Twice, and Reckless. He is also coauthor of five number one bestsellers with James Patterson, including Judge & Jury and Lifeguard. His books have been translated into more than twenty-five languages. He lives in Westchester County, New York, with his wife, Lynn.

Jay Erlich’s nephew has been found at the bottom of a cliff at Morrow Bay. It’s all just a tragic suicide, until secrets from the past begin to rear up again. Did a notorious killer, jailed for many decades, have his hand in this?Years ago, Jay Erlich’s older brother, Charlie, a wayward child of the sixties, set out for California, where he fell under the sway of a charismatic but deeply disturbed cultlike figure. Tragedy ensued and lives were destroyed, but as the decades passed, Charlie married and raised a family and lived a quiet, secluded life under the radar. Yet the demons that nearly destroyed him never completely disappeared.

Drawing on two real-life experiences from his own past, Gross has crafted a richly personal, yet utterly terrifying tale of two brothers, one successful, one wayward, trying to bridge the gap of what tore them apart.

My Thoughts:
Ugh. I picked up Eyes Wide Open because I was hoping for the same non-stop action, heart-pounding page-turner that was 15 Seconds, which I enjoyed this past summer. Unfortunately, Eyes Wide Open was not that book. The unoriginal plot not only was messy and extremely repetitive. Pace was frustratingly slow. The characters were not only unlikable, but confusing. The villains defied logic. And the police are useless. However, there were some wonderful suspenseful moments. I also applaud Gross for using his only experiences, but overall Eyes Wide Open was just your average suspense novel that I would hesitate to even call it a thriller.

When In Crisis, Just Claim You’re A Doctor
Or at least that’s how the protagonist, Jay Erlich, operates. “I’m a doctor.” seems to be his default automated message. He says it to emergency personal, cops, reporters, taxi drivers, everyone else he meets. I get it, you have a fancy medical degree, so what? What being a doctor has to do with solving crime is beyond me.

For some reason, all of Jay’s “guesses” turn out to be correct, or somehow turn into truths as the story progresses. The witnesses claim to be unsure of the suspect’s gender. Along the way, the suspicions are dropped, and everyone believes the suspect is a woman…because a doctor (who didn’t even speak to the witness) suspected it.

Also, Don’t Tell Your Family Anything
One of the most annoying parts of the novel is Jay’s numerous phone calls to his over-reacting wife. He’s only gone for a week, and she’s already freaking out. Gosh, woman! Calm down! It’s ONLY been a week. I thought at any point she would be filing for divorce. His I’m-not-going-to-tell-my-wife-anything-because-she-won’t-understand attitude doesn’t help matters either. What kind of marriage is this? I’m supposed to like this guy? Really?

END_OF_DOCUMENT_TOKEN_TO_BE_REPLACED

Andrew Gross is the author of the New York Times and international bestsellers Eyes Wide Open, The Blue Zone, The Dark Tide, Don’t Look Twice, and Reckless. He is also coauthor of five number one bestsellers with James Patterson, including Judge & Jury and Lifeguard. His books have been translated into more than twenty-five languages. He lives in Westchester County, New York, with his wife, Lynn.

Henry Steadman is a successful Florida plastic surgeon on his way to deliver a keynote address at a conference when his world falls apart. Stopped by the police for a minor traffic violation, the situation escalates and he is pulled from his vehicle, handcuffed, and told he is under arrest. Several other police cars arrive and the questioning turns scary, but after it subsides, and Henry is about to move on, the officer is suddenly killed in his car and there is only one suspect: the very person he was about to arrest not ten minutes before. Henry! When a second friend turns up dead, Henry realizes he’s being elaborately framed. But in a chilling twist, the stakes grow even darker, and he is unable to go to the police to clear his name.
-synopsis from Goodreads.

My Thoughts:
Andrew Gross threw me on a roller coaster with 15 Seconds, Harlan Coben was not kidding when he said it was a “stay-up-all-night thrill ride.” Every time I glanced to the page number, I was another 100 pages in. The suspense glued me to the book (Which I finished in one sitting) until the last page was turned. Gross just knows how to keep his readers excitedly guessing. However, despite how much I was enthralled with the story, there are times when I couldn’t suspend my disbelief.

Plot:
I was disappointed that I already guessed where the story was headed before the first hundred pages and how the characters were tied to each other (though I did expect a more complex plot.) It didn’t stop me from wanting to experience the story–but was a slight let-down when the plot wasn’t as brilliantly complex as I hoped. I really wanted a mind-blowing plot twist–but everything was resolved too easily before tension can be built.

Characters:
Henry: The stereotypical nice guy, rich plastic surgeon, and handsome. I pitied him since he gets himself in a mess by seemingly being at the wrong place at the wrong time–but then it turns out he was at the very right place at the right time. He also does hilariously stupid things like attempting to chase a murderer by going crazy on a highway…which only makes him more human. I like him, but I was frustrated at his LUCK: how a nationally wanted serial killer can walk into a prison is beyond me (even if he has a poorly made fake id.) I also thought he got off way too easily; he isn’t completely innocent and owed a few apologies.

END_OF_DOCUMENT_TOKEN_TO_BE_REPLACED

Buy a copy via Amazon.
Goodreads.

The Author Behind The Book (from Kristina Riggle’s Website):

Kristina has published short stories in the Cimarron Review,Literary Mama, Espresso Fiction, and elsewhere, and she works as co-editor for fiction at Literary Mama. Kristina was a full-time newspaper reporter before turning her attention to creative writing. As well as writing, she enjoys reading, yoga, dabbling in (very) amateur musical theatre, and spending lots of time with her husband, two kids and dog.

From the critically acclaimed author of Real Life & Liars and Things We Didn’t Say comes a timely and provocative novel that asks: What happens when the things we own become more important than the people we love?

Trish isn’t perfect. She’s divorced and raising two kids—so of course her house isn’t pristine. But she’s got all the important things right and she’s convinced herself that she has it all under control. That is, until the day her youngest son gets hurt and Child Protective Services comes calling. It’s at that moment when Trish is forced to consider the one thing she’s always hoped wasn’t true: that she’s living out her mother’s life as a compulsive hoarder.

The last person Trish ever wanted to turn to for help is her sister, Mary—meticulous, perfect Mary, whose house is always spotless . . . and who moved away from their mother to live somewhere else, just like Trish’s oldest child has. But now, working together to get Trish’s disaster of a home into livable shape, two very different sisters are about to uncover more than just piles of junk, as years of secrets, resentments, obsessions, and pain are finally brought into the light.
-synopsis from Amazon.

My Thoughts:
Trish is not abusive, and her son, Jack, absolutely adores her. But one day, Child Protective Services are at her door threatening to take her seven-year old Jack out of her custody–not because she hit her children, but because she has too much junk in her house.
Trish is a compulsive hoarder; her walls are lined up with columns upon columns of boxes filled with stuff she doesn’t even remember. She hasn’t seen her dining table in ages, nor the paint on her walls, and her fridge is filled with rotten food. To makes matters worse, the family she has long shunned out of her life comes back to “help” her organize her junk…and her life–whether she likes it or not.

Structure:
Kristina Riggle’s Keepsake mainly alternates between two sisters, Trish and Mary’s point of view, with the odd chapters dedicated to Trish, and the evens to Mary. While Trish represents the defensive, troubled hoarder, Mary represents the condescending judgments of someone who just “doesn’t get it.” Through Mary’s eyes, I can feel her disgust, but through Trish, I can also see her intentions. By using alternating viewpoints, Riggle opened my eyes to the inside world of a compulsive hoarder, their conflicts with their family members, and themselves.
END_OF_DOCUMENT_TOKEN_TO_BE_REPLACED

Here’s my conflict: I want to use this blog to write about my daily life (which I may be deluded into thinking is very interesting), but I fear it may be clashing with the purpose of this blog. While I may think my life is the best thing on Earth (next to sleeping and green tea mochi ice cream), my followers (ugh, this word makes me feel like a clan leader, I think I will go with “readers” from now on) may not think so. I suppose I could separate all my musings into another blog, but then I would probably end up with two sparsely updated, dead blogs rather than one not-as-dead-but-still-sparsely-updated blog.

END_OF_DOCUMENT_TOKEN_TO_BE_REPLACED 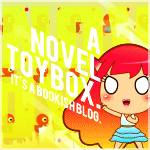